So following a successful, and highly competitive RTT at huzzah over the weekend, we emerged with the following...

First - Lee, with his straight out necrons 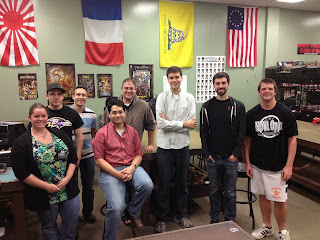 This new Inquisition book annoys me, not only does it screw over heretical and some of the xenos armies even further. (3rd ally? really? really? wtf?), it seems to essentially killing assault AND bike armies even further. Can anyone say, servo-skulls (prevent scout moves important for positioning) and psychotroke grenades, one of the most OP items in the game, for all? Nothing fucks an assault army, like one guy walking around with those things.

Oh all your guys sit there and hit themselves, or suck in combat, or simply do nothing.. with only a 16% chance of nothing awful happening. Oh, and best part, they work regardless of if you are assaulted, or assaulting. Yeahhhh that seems totally legit, lets add that to every imperial army.

And, as if assault wasn't difficult enough as it was. In most cases, if the army is battle bro's, theres literally no reason not to just add this guy as an ally. Why? oh, no real big reason.. you know, no real reason, just Divination, stupid cheap, without interfering with your normal armies setup / configuration.

Lets give everyone prescience, or ignore cover, or whatever goodies there may be on that table.

EXCEPT, Ork, Tyranid, CSM, CDM.... because they, and their allies, can't effectively get those abilities, or share it with them.

Never mind that its actually super fluffy to have inquisitors for every single faction of the game, not just imperial armies. There are evil and fallen inquisitors you know, and those that delve into xeno friendships.


I know there are other things in the book which are crazy, but they require larger points investments, which may or may not actually make the additions points effecient to armies. So i'll save those thoughts for another time.


I happen to know a thing or two about winning games as a pretty much exclusively Orks / Tyranids / Heretical army player. It's difficult enough as it is, without adding this 36 to 100 points of bonus ally. If you're going to do something like this, it should be for everyone, or no one.

Just wanted to remind everyone that our monthly RTT at Huzzah hobbies is approaching this Sunday! Since NOVA season has ended for now, we will be switching to 2k, (1999+1) so no double FOC.

As always - registration starts at 10am, first game at 1045. Entry is 15 and covers lunch. The rest is rolled directly into prize support. As usual we do not require any painting or fancing basing.

For those interested in proxying models, as long as you don't have any other models of that type in your army, and they have a passing resembelance to the models being proxied, proxies are O.K.
Posted by birdux No comments: