So we had a very well attended RTT at Huzzah Hobbies this past sunday. With 18 players making attendance!

the tourney is posted on torrent of fires website, so you can review it from there!

I allowed one formation per army, and codex inquisition. This didn't go over to badly.

I will be allowing,

Stronghold assault models which are not AV15, have D-weapons, or are networked systems.


That bit of business out of the way 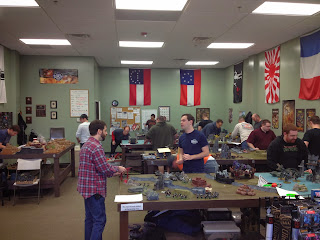 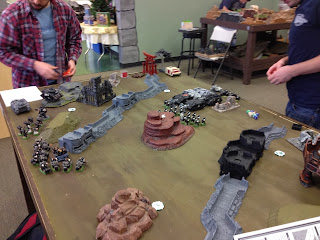 I really wanted some trench warfare, so this is the best we could do for this event. 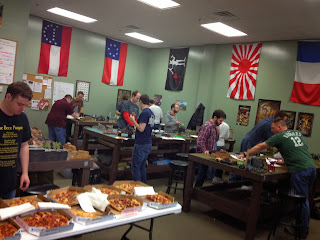 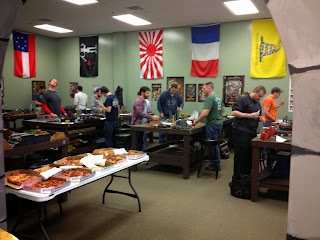 Look at all those glorious games 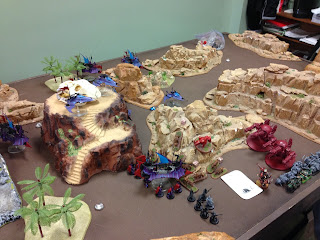 This table was hilarious. We set it up for Pryts and I to play on as a joke, and people liked it so much we left it for rounds 2-3. Here Anthony's dark eldar duke it out with the nefarious forces of chaos.

Our monthly RTT will be at Huzzah Hobbies this Sunday. 2k points, no double FOC. Three rounds.
Signups start at 10, First round at 10:45.

Food / drink as usual are part of the entry cost. The rest of the money is rolled directly into prize support.

Additional rules:
Please note, thanks to GW's lack of clarity, it is impossible atm to know if the tourney scene will be using the escalation / fortification expansions. So, until I hear from adepticon / NOVA one way or the other, these books will not be allowed.

Differently though, are the data-slates. As these essentially are like the old white dwarf updates of old, for the time being I will allow them. That said, I want a hard limit on formations - only 1 allowed per army. TOTAL ARMY, not one formation per detachment.

Havn't posted in forever, but today's a snow day so I guess I no longer have an excuse!

So this will be recapping the 2013 11th Company GT! First, it was good to see all of the people I havn't seen since Adepticon. I wish I had been more conversational, but I spent most of Saturday super hung over, and Sunday stressed about trying to win until the end of round 6. As usual, I think the 11th company is the best GT I attend, the atmosphere is solid, very friendly, and lots of fun! Maybe its the common bond of everyone feeling like they know our hosts, being all friends in a friends house?

I took essentially what is becoming my go-to list, and the same one I've been posting for months. 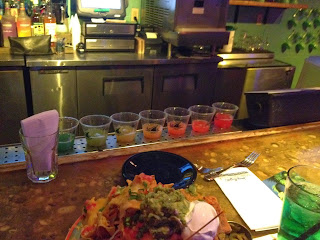 Started the night before off correctly! We went to Margarettaville with Owen, Bridgett, Matt and Charlie. Drank a ton, got to drunk to drive, and woke up the next day with a killer hangover and a queasy stomach. 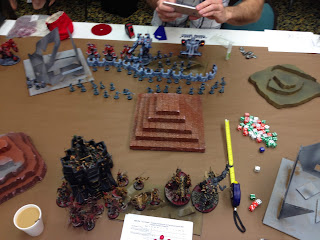 My opponent rolled first go, and we deployed as shown left. He set up his kroot screen as infiltrators. Then I seized, which basically skewed the entire game from his win to my win. As I was able to assault into most of his kroot, dodging some shooting for some units, or at least, clearing the screen earlier than he would have liked.

I think his farsight bomb almost ended me when it came in. I don't remember how/why though. He killed a bunch of stuff / blew up my bastion with it though. 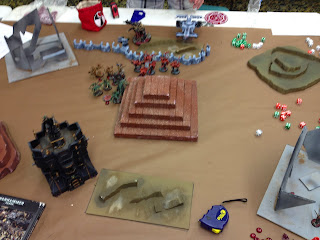 End of the game. The skyray is a wreck for clarification. Full 20 win. 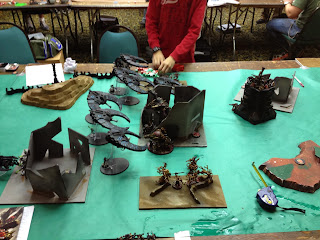 I looked across the table and was like... you've got to be kidding me. The one guy who brings a solid necron airforce, and I get matched against him round 2. I figured this was karma for something, I just had to figure out what and go make amends.

So I won the roll to see who goes first, and gave it to him. Which apparently he didn't understand why I did that. 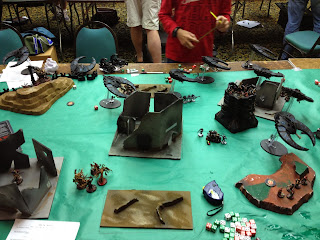 So pictured left is the bottom of top of turn 2. Thanks to the comm's relay, all but two fliers came in. I lucked out, the Doomscythe failed to destroy the bastion, and the shooting killed a few spawn and a single maulerfiend.
My strategy was essentially to rush past him and take out the units controlling his side of the board, then return to board middle, and move out for turn 5 contesting / assaulting. This is more or less what happened, and it worked out.


He flew around and shot at me, and I hid as best I could. 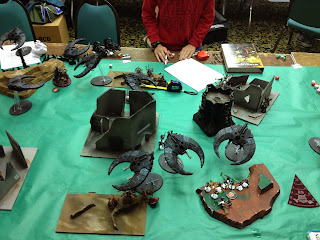 On turn 5, thanks to some plucky cultists and a maulerfiend, I was able to win on objectives, otherwise it would have been a tie for objectives, and then winning on quarters / kill points. 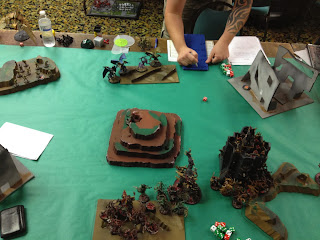 I waited to long to write this game up, but the summary is kinda like this. I went at him, he went at me. Bridget also started bringing me booze again at this point, so I was nice and drunk again by the time game 4 rolled around.

After failing some grounding tests, he needed to rescue fateweaver (pic #2), so landed his other daemons. We got in a big scrum, which saw him winning  the right side (from my perspective), and me the left side. 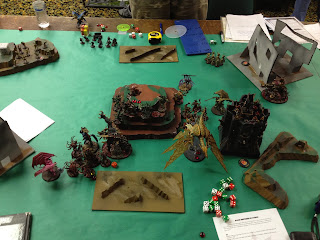 His helldrake came in turn 3 and caused all sorts of problems. Then died to lascannon snap fire, wooo. I don't remember what happened to mine, it ended up in picture 4 somehow though. I think it was killing troops. 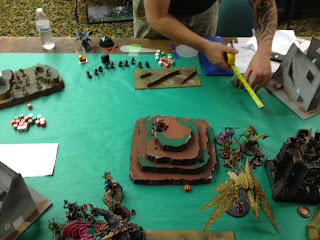 After cleaning up the left side, I moved my models to the right side, locking that down and letting me have the win. 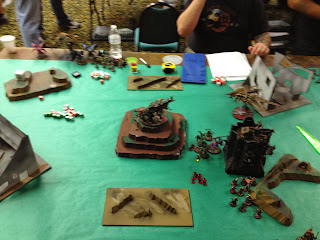 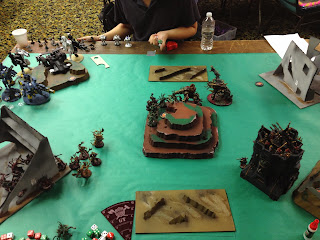 I took first go, ran at him as pictured to the left.

His shooting was fairly devastating, but not enough so stop the inevitable charges.

Also if you were there, and heard a huge slam. That was me, no it wasn't rage quitting, I was overly excited and threw down my dice/fist hard "accidently" as in BAM, headshot! YOU DIE!

er.. =0 Yeah I was being immature, if my opponent hates me now, its fair. 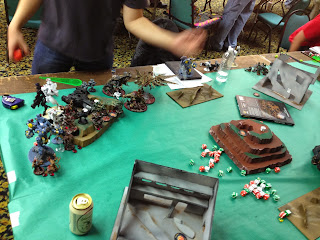 Combats and stuff. I ended up winning them and cleaned him off the board. Not that it wasn't difficult, he played it well, I just don't remember all the details.

I played Jessie Newton again, and this time our game was very close but I managed to pull off a win. Hammer and Anvil Deployment, objectives.

Jessie kept hitting and running out of our combats, was doing fairly well, but unfortunately for him I passed a ton of pivotal saves / leaderships which he needed me to fail. Dice Gods ftw.?


Game 6 vs. Daemon FMC w/ CSM allies (Helldrake / black mace). This list was almost a mirror of my game 3 list. Unfortunately I was unable to ground Alex's FMC's, and a few combats that I needed to go my way (killing the portalglyph with several pens that were blocked by invulns for example), and it didn't happen. Despite the fact I was holding 3 objectives Alex was able to contest my objectives with his in-air FMC's, and hold one objective for the win.

I'll note, Alex went on from here to win game 7, taking the whole event and winning Best General. So, I lost to the bro who won, so I guess I can't feel super bad about it. =0

This game was vs. Kurt. We had a lot of fun and ended up going until turn.. 13 or 14? There was some close combat between havocs and swooping hawks that just needed to happen. Also a personal vendetta vs. some broadsides needed to be fulfilled.

A good summary of the game is, I ran at Kurt, I had enough models going into the charge time to pull off a win; then I failed 2/3 charges. Next round, I still was doing decently, until Abaddon + his spawn squads decided It should take 4-5 rounds of combat to kill a single wraithknight.  which let Kurt hilariously finish off the other assault bits, then circle abbaddon and shoot him in the face when he finally broke free.

Also we swapped rolling for each other. It was a good goofy game. Bonus,  the points from it gave Kurt the points he needed to win Battlemaster!

Though negative, if I had taken a few points from the game, I would have gotten Best Overall, /sad.

Oh well, that's ok though, because I ended up winning, much to my surprise, Best Appearance!

The judges were very considerate and really liked my theme and overall presentation, giving me a few crucial points to beat out some stiff competition! Thank you to the Judges! 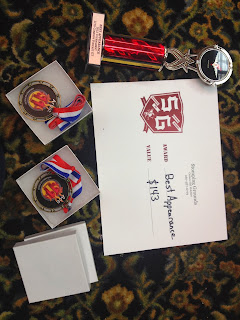 Worth noting, that despite the community dice, this is the first 40k event I've been to in years where I didn't end up sick afterwards, so yay that! Probably because of all the booze =0
Posted by birdux 1 comment: