I've been MIA for a bit, work caught up with me and slammed me.

I want to remind everyone that our monthly RTT at Huzzah Hobbies in Ashburn, VA, will take place this Sunday! (7/21). The entry fee is the same as always, 15 dollars. All entry fee's go towards lunch/drinks and prize support. Registration starts at 10am, and the first games start rolling at 10:45. Call the store and let us know if you are running late and we will hold spots for you. (703) 466-0460

We do not require any painting or fancy basing. Just make sure that models are as close to WYSIWYG as possible, and you don't use models incorrectly. Please bring several copies of your list for your opponents!

Or text my phone those unfortunate few who have my number!

We will be playing NOVA missions, which ones will be randomly decided at the time.

In other news I was silly and picked up the new Apocalypse kits over the past weekend. My next post will cover the new "rules" for the terrain, but for now let me post pics of the big guy. Who does look way better in person than in photographs btw.  I also made it into the top 8 players for our IFL league, so there will be a final RTT on August 4th to decide the grand champion of that *cough cough* Gonyo *cough cough*.. oh excuse me there. 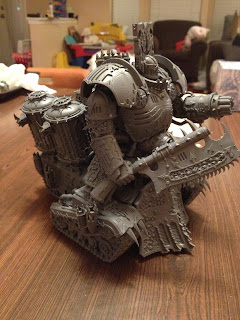 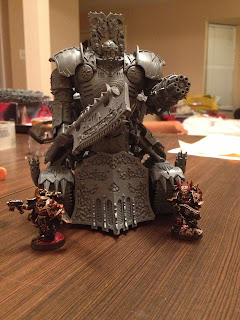 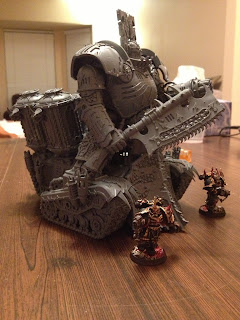 Posted by birdux No comments:

Happy Belated Independence Day to my American readers. Todays post recaps an 1850 40k game I played vs. Tyranid, and some painting for my army. I have not posted for a while due to extreme work hours and general updating / painting my army some more. I had someone who will remain anonymous, but a paint judge for a "large" event (not adepticon), tell me that my army lacked a cohesive theme, and that it make no sense that I had red guys, and green guys, mixed with some black guys. Needless to say it was blatantly obvious this individual had no idea what the fluff is for Chaos Daemons, or Chaos Space marines. Explaining it too this individual didn't help either. (EDIT here based on Tim's feedback, original comment cut).

That said, I decided if said paint judge was unable to figure out a theme in my army, then I'd spruce it up some as no doubt there will be future paint judges who are also unable to find a theme, for any number of reasons, or probably shouldn't be paint judges in the first place. See my post about Adepticon's 2013 lack-luster paint judges.

So that out of the way, I've decided my love for Papa Nurgle only grows deeper day by day. After all, out of all of the Chaos Gods, only he truly cares for his children. He actually turns his followers into Plague Bearers when they die, rather than oh say, devouring their souls, or just being really uncaring, or a douche who uses everyone for his own ends which maybe he doesn't even know. Fuck those guys, seriously. Come join me in my worship of Nurgle.

Night fight - Yes
First Turn, rolled by me, given to Ben
Seize - No

Mission - The mission consisted of several primary objectives each worth a number of points. Slay the Warlord - 1, LineBreaker - 1, Center Objective - 1, having more corner objectives than opponent - 2.

Whoever had the most points at game end wins.
I took two Close combat weapon rewards (instant death, plague flail) on my Herald. The Plague Drone Sarg took the instant death sword. My warlord trait was to infiltrate d3 units.. (yay uselesssss...). Ben rolled Iron Arm for all of his Tervigons, and  a few Endurance's here and there. The Flyrant got Endurance I believe. 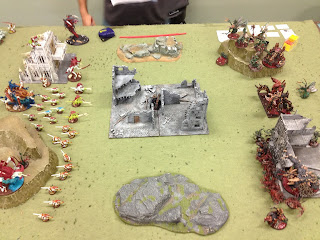 This is Deployment. Ben ran his models forward, and fired with the biovores inflicting a wound or two I think. His flyrant flew along the far board edge to take some pot shots at the plague drones causing a wound. He spawns gaunts on two of his Tervigons - also exhausting them. My turn 1, I ran forward at Ben while staying in Cover so Gaunts would have to attack me at a lower Initiative if they assaulted. Plague drones moved next to the flyrant in a half-hearted effort to  shoot at him on the off-chance he was grounded. Surprise! He was grounded. Then assaulted by plague drones. I made a mistake here that nearly cost me the game. I had a maulerfiend I could have easily moved to support the plaguedrones in assaulting the flyrant and would have guaranteed it dying had it been grounded. I didn't though, shame on me. Also, Ben forgot to challenge, and I set it up so I couldn't have my herald challenged (in case he remembered to), and then Ben proceeded to boss about 2-3 armor saves, and 4 or so Instant Death wounds. I was sad to say the least. 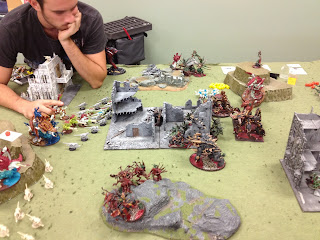 Top of turn 2. Ben has his Ymaryl genestealers and the Trygon arrive from reserves. The ymaryls pop out in the center ruin and assault my maulerfiend / soul grinder. The Trygon comes onto my backfield and shoots ineffectually at the maulerfiend. Gaunts run forward and pop shots at my T5 spawn squad and kill one with the help of the biovores and tervigon. Hive Guard hit a maulerfiend quite a bit but fail to damage it.  Ben assaults my T5 spawn squad with gaunts to tie them in combat on my turn (which is successful as the khorne lord hits himself in the face, but does not wound). He also tries to charge in the Tervigon in order to challenge and squish the Khorne lord, but he just  barely fails his charge. (Iron arm was up with +3 at turn). Ymaryls fail to damage the two vehicles and lose two for the result. His backfield Tervigon pumps out some gaunts and runs them into combat with the plaguedrones. 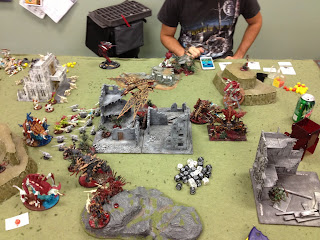 Bottom of Turn 2
For my Turn 2,  Helldrake came on with one squad of cultists. Helldrake vector struck the Trygon causing two wounds, and flamed down some gaunts which was somewhat pointless. The maulerfiend in the open ran forward to assault the Tervigon.  Plague Spawn and Plague lord moved up to multi charge the crap out of his squads. However, I over-moved by about two inches some spawn here due to the ruins, so after correctly placing them, we found that my spawn were not in range for the epic charge that I was hoping for. So I just ended up nailing the gaunts real hard. Woooo Gaunts.
So at the end of this turn of combat, the flyrant has passed another 4 instant death armor saves. The gaunts have been beat up by the plague drones. My Plague lord / nurgle spawn are locked in combat with 4-6 gaunts. The khorne lord and his spawn are free hanging out on some terrain. The maulerfiend / soul grinder kill the remaining three Genestealers and consolidate as shown below. 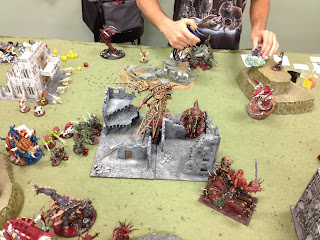 Turn 3 (Top)
The Doom comes in, he scatters a bit and lands in between the middle terrain and the far scatter piece. He gets out and disembarks towards the plague drones to go cause em trouble. Ben spawns more gaunts, finally exhausting his last Tervigon with a mighty 18! These suckers charge into combat with the plague drones. His Trygon assaults the soul grinder slipping in 1 pen, and blowing it up! The maulerfiend and Tervigon hang out and have a dance party. His middle tervigon and nearby gaunts move next to the Nurgle lord and assaults his squad. The Tervigon in the far region moves into terrain in an attempt to assault the plague drones, but fails his charge. So a bit of a WTF moment here. The Tervigon in the middle has Iron arm up I believe, and ends up in a challenge with the nurgle lord. The nurgle lord gives him an amazing 7 wounds, which he promptly fails 5 on (having lost one previously on a perils), and eliminates himself flat out. If that's not just crazy bad luck I don't know what is. Seriously. 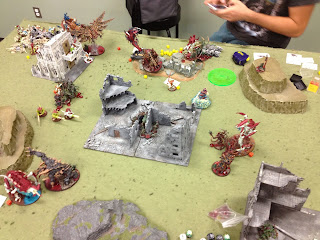 Bottom of Turn 3 (photo is the end of turn 3). One Maulerfiend is now stuck into each of the remaining Tervigons. They are steadily causing wounds despite Iron Arm and Endurance. (Though the top one passed three FNP saves! Like a boss). My Nurgle lord has assaulted into the Biovore / Tyranid Prime (warlord) squad. Leaving the Tyranid Prime with only a single wound left. My juggy lord + his spawn assault the Trygon. He is left with three wounds, and I lose a spawn. Trapping the back Tervigon outside of the 6 inches needed prevents the large squad from having poisoned attacks which would have otherwise ravaged me real bad has been redeeming.

So Ben assaulted his Hive guard into my nurgle lord squad to see if he could rescue his warlord and possibly kill my warlord. That did not turn out well as spawn rolled a crazy shit ton awesome number of attacks/wounds and everything died. My maulerfiend in the bottom left finally killed his Tervigon, as did the maulerfiend and his tervigon in the far backfield. The Trygon died to the juggy lord. The doom just barely failed to charge my plague bearers in the middle. (can't really see in the picture well but my cultists have snuck onto the board in the bottom right and taken an objective). The Plague drones at this point have basically evaporated with only 1 with 2 wounds on him left. Ben keeps forgetting to Smash and this has been my saving grave (Sorry Ben!). Also i think my dice have been kinda stupid hot on saving throws for them.

Ect, so basically I throw the now free maulerfiend at the Doom. The other one can't move as its been immobilized. The nurgle spawn go to assault into the gaunt / flyrant combat just to lock him down for the extra turn or two that would buy me. Nurgle lord goes and kills the last two biovores. Regular spawn go sit on an objective just to contest it in case Ben wins free. That's basically it.

So I got linebreaker, Slay the Warlod, Middle Objective, and more corner objectives. Earning me a well fought win.

This game had lots and lots of pivots and could have gone either way frequently. His Tervigons has crappy penetration results which let the maulerfiends hang out longer than they should have. I managed to have it will not die rolls actually be semi-useful. The Tervigon blowing up to the nurgle lord instantly was just crazy silly. If those outcomes had gone the other way, I could have seen this game going against me entirely as Ben could have hung back to sit on his objectives, and I would not have been able to prevent the doom, a eventually freed flyrant, or the gaunts from gaining linebreaker or contesting my middle.

Ben did boss through a silly number of instant-death wounds on the flyrant. I think like seriously 9  to 12 of them. So maybe that makes up for the Tervigon implosion. Dunno. The gaunts were out of range of their mommas in clutch moments too, so that could have changed things. Ben's dice let him down on several charges he needed which would have changed the range issue.