As most of you reading this blog will be aware, Phil runs a blog (I think? =0) which can be found here...http://roguetradergaming.net/ .. Go check it out!

I went to a 32 person GT run by Phil that was initially delayed due to a massive snowstorm, but eventually regrouped a month later. The interesting thing about the GT is most of the attendees were like a whose-who of GT circuit players. So all the people you'd normally expect to see at the top tables of a far larger GT. So this made Hammer in the New Year a much more difficult GT from the onset, as almost everyone there was an experienced player, rather than having a few baby seals to club as a warm up. Overall this was a fantastic event and I hope Phil runs another one next year.

I have to give a very substantial public shout out to Charlie for Game 4 - At this point obviously we both had lost a round so were out of the running more or less, but Charlie was extremely gentlemanly in our game despite overwhelming poor luck on his part.
The game went like this:
I hid my entire army behind a ruin for turn 1 and tanked all of the SMS from the riptide wing, but turn 2 I ran forward leaving myself very open and exposed by necessity of the terrain. So Charlie had one turn to shoot my army off the board to cripple me. The thing about riptide wing with marker dones, is that it actually has enough ignore cover shots to do this. With all the marker drones, and the firing twice thing, its a ton of BS 5 S5 + ignore cover shots incoming. More than adequate to wreck a non-invisible thunderstar like mine.
So turn 2, Charlies reserves come in, and I think we both got kinda caught up in him using them to try and melta-gun my whirlwind to death, because he forgot to nova-charge all his guys for the extra delightful shooting. So when it came time to fire the riptides, we both realized at the same time he had forgotten to this action he would have very obviously done. He had already started shooting his meltaguns on his crisis suits... So we both kinda awkwardly stared at the board, because nova-charging was/is literally the difference between winning the game or not. Obviously if Charlie had asked to roll his nova charges, I would have had to agree, because its such an obvious thing to do. It's not like you'd decide later to not nova charge, the only time riptides do not nova charge is if they have one wound left. It's just a thing. But Charlie did not ask, knowing full well it would cost him the game, and I thought that was extremely gentlemanly, as it did not put any of the obligation of the mistake on his opponent (me obviously). So for that, I have to give him a shout out.

I also somehow passed way more 2+ saves, and FNP's that are statically average.

I know we were in the losing bracket, but its still a thing. Charlie 100% had me, and we rolled it out after the game concluded to see how it would have gone had he remembered, and he wrecked me hard. In my mind Charlie has the real win on that game, leaving me 0-2 vs. him. 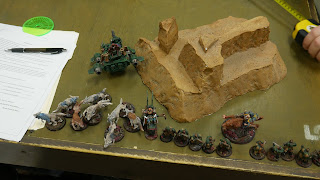 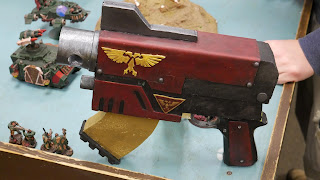